A blog to find flash fiction, details about latest stories, and just find out what is going on in the mind of the Madam Kistulot.

Red Moon Rising will drop on paperback… incredibly soon! Don’t miss out on it!

You’ll be able to order that once the paperback goes through Amazon here!

You can also get it on Smashwords here!

But I do have some other exciting news to share!

If you read Tender Loving Control on Read Only Mind? Thanks to the devs hanging out in Mind Control Literature, a server for MC fetishists to hang out and chat, there’s a new green mode! if you go to settings, the leaf option at the top will make it look VERY nostalgic to long time EMCSA readers! Even MC Stories doesn’t have green anymore!

But that’s me for now!

Join my discord server, Madam Kistulot’s Domain, to chat with me and other fans!

I’m so excited for the second Volume of Red Moon Rising to drop, and I  hope you are, too!

RMR is one of my favorite books in the series, and it seems like everyone is enjoying it so far. The rewrite was the easiest of the original ten… namely because by then I had an editor, and I was getting a lot more feedback a lot more regularly. I think it was a good time for me all around.

To learn more, check out my Patreon and see just how much hot mind control fiction you can get before anyone else!

If you’d like to chat with myself and other fans of my writing? Don’t forget to join the Madam Kistulot’s Domain Discord!

But while this might not be the most exciting post… know that new art is going up on my website on Tuesday, along with a new release!

There’s so much good still to come for this year… and in fact, I’m about to head over to Patreon to write their weekly blog where I tell them just what I’ve been up to.

Care to join me?

Until next time, take care of yourselves… and each other!

Today is an exciting day! I keep meaning to push this blog back to Tuesdays for various reasons, but it keeps not working… so maybe I need to accept that it isn’t good for my schedule. That said?

To Serve and Obey is out, and some have even received their paperbacks!

Grab yourself a digital copy on Smashwords, pick it up on Amazon, or grab the paperback on Amazon!

People on my discord server were informed of this release before everyone else! It came out early as a special treat for my birthday. If you want to see when that happens so you don’t miss out, join us on discord!

Want to see how my shelf looks at the moment? That book with the edited spine is Red Moon Rising–a prerelease copy for cover tweaking. Though my editrix/cover designer did an excellent job on it, we wanted to be perfectly sure there would be no issues since we’re moving on to a new artist!

That’s right, starting with Red Moon Rising the art of Silver Girl, and my other works, will no longer be represented by Rotem Dishon. To get a little preview of the art for Red Moon… 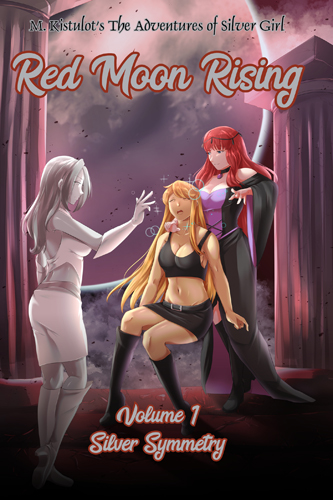 Red Moon Rising is a story that a lot of people have been waiting for, long time fans and those who first jumped onto the series with the rewrites. I’m so eager for them to see what many back in 2007 called the best story in the series, including fellow writer Flibinite. Though it was Ink Soaked Penumbra that won an award from the community, RMR was a story a lot of people remember fondly.

I am so eager for March!

But there’s still more to come from me this week! Tomorrow my $5 tier patrons get to see the end of Fantasy to Reality, a story that really means a lot to me in a twisted, libido-driven fetishistic sense. My $10 patrons get to read Ongoing Education, a lovely short story about a girl and her teacher. My $15 tier patrons get to read Give a Penny, Take a Penny. This story was inspired in part by sharing a birthday with fellow MC Writer Skaetlett, so take from that what you will. It’s part one of two, but there’s still so much in part one to look forward to!

And so many more stories after that, too!